Wiyot ancestral territory extended from Little River near Trinidad to Bear River Ridge near Scotia, and east to Berry Summit and Chalk Mountain. The region supported in a pre contact Wiyot population estimated at between 1500 and 2000. However this population declined to approximately 200 after 1860, the 100 by 1910, the result of disease, resource depletion, slavery, displacement, and genocide.

The first recorded "discovery" of Humboldt Bay by Europeans was in 1806 by Captain Jonathan Winship. Sustained contact began in 1849 when Josiah Gregg journeyed overland to Humboldt Bay. His party of expolorers was met by Wiyot headman Ki-we-lat-tah on the day following their arrival at Humboldt Bay. According to L. K. Wood, Ki-we-lat-tah and his family rowed across the bay to greet the party of explorers, welcoming them with a feast of clams and providing them with "every means of comfort in his power." 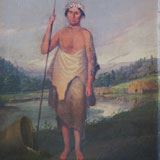 It was the discovery of gold in 1849 that brought white settlement to the Bay, and resulted in the destruction of Wiyot people and culture. The ensuing, "Indian troubles" culminated in a series of massacres February 26, 1860, the most infamous at Tuluwat on Indian Island in Humboldt Bay.

The Wiyot people had gathered at the traditional site for the annual World Renewal Ceremony, which lasted seven to ten days. At night, the men would replenish supplies, leaving the elders, women and children sleeping and resting. Under cover of darkness, local men armed with hatchets and knives rowed to the Island and brutally murdered nearly all the sleeping Wiyot. Estimates of the dead ranged from 80 to 250 in that night's series of orchestrated massacres. 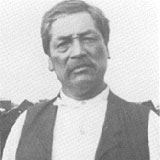 Although the white men involved were locally known, no charges were ever filed. Remaining Wiyot temporarily took refuge at Fort Humboldt (where nearly one half died of exposure and starvation), and later were forcibly relocated to reservations at Klamath, then after a devastating flood in 1862, to Hoopa, Smith River, and Round Valley.

The Wiyot people did not disappear, and attempted to return to their homeland. Often, they found their homes destroyed and lands taken. Wiyot cultural practices and language were discouraged by official policies of "acculturation." Wiyot people learned to work and live within the white community, effectively "walking in two worlds." Wiyot people often went to white schools, married European immigrants, and helped to build the timber, fishing and agricultural industries.

In the early 1900s, a church group purchased twenty acres in the Eel River estuary for homeless Wiyot people. The Federal Government later transferred this land into trust status in 1908. This land became known as the Table Bluff Rancheria of Wiyot Indians, now referred to as the "Old Reservation."

In 1961, the California Rancheria Act terminated the legal status of the tribe, and the Wiyot effectively became non-Indians Indians. In 1975, the Tribe filed suit against the Federal Government for unlawful termination, and in 1981 federal recognition and trust status was reinstated in Table Bluff Indians versus Lujan (United States). In 1991, during another lawsuit regarding drinking water contamination and other sanitation issues on the Old Reservation, the court mandated new land be purchased and the Tribe moved to the present 88 acre Table Bluff Reservation. The original twenty acres were put into fee simple ownership under individual families, but still are under the Tribe's jurisdiction as long as held in Indian hands. The two resrvations are within one mile of each other.

The Tribe is now 600 members strong and growing. Wiyot people are actively recovering the old ways, including language, ceremony, and lifeways. At the same time, they acquire new trades and skills, graduate from college, become artists, doctors, lawyers, teachers, and professionals in a variety of fields. The Tribe is also dedicated to preserving native history and the cultural material of their ancestors. This includes the ancient village sites and shell middens that surround Humboldt Bay, occupy terraces above the waterways, and are being discovered along the ridge lines used for seasonal camps, travel, and trade. Pieces of long forgotten native history are emerging, both from professional and archaelogical investigation and from family memories and records. Much has been lost or destroyed, however there is also much that is "coming home."