Create an Account - Increase your productivity, customize your experience, and engage in information you care about.

Gaming Compact Signed by the Governor

Gaming Compact Signed by the Governor of California

After nine years, the Wiyot Tribe finally has its gaming compact. Gov. Schwarzenegger signed compacts between the Wiyot Tribe and the North Fork Rancheria of the Mono Indians, Monday April, 28, 2008. Under the compact, the Wiyot Tribe would forego its right to game on it lands along Humboldt Bay in exchange for a slice of the economic pie from a gaming facility to be built and operated by the North Fork Rancheria. The new casino would be located on a 300-acre parcel just north of the city of Madera, which sit in the rancheria's historic area.

By entering into the compact, the North Fork Rancheria also forfeits right to game on its other lands. These compacts are a model for protecting the environment and balancing the needs of the tribes and local communities. The compacts avoid construction of a casino along California's coast and in the Sierra Footfhills, while respecting both tribes sovereign right to pursue economic development through gaming and other means.

In the big picture, the Wiyot Tribe is expected to reap between $3-5 million a year, nearly four times as much as the tribe currently receives in gaming allotments under state. This will provide more programs and a more stable funding source. 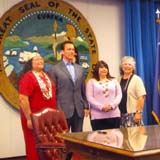